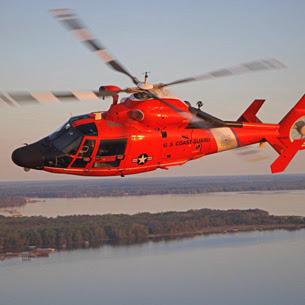 U. S. Coast Guard H-65 Dolphin helicopter.[i]  (Photo courtesy of U. S. Coast Guard)
Semper Paratus (Always Ready) is the U. S. Coast Guard’s motto and is a fitting lead-in to discussing what the term “readiness” in readiness-based sparing really means.  For the Coast Guard’s fleet of 101 H-65 Dolphin aircraft assigned across 17 air stations around the U. S., readiness means the aircraft and crew are able to launch and perform any number of rescue and/or law enforcement missions.[ii]  This readiness enables the Coast Guard to rapidly respond to emergencies, such as in August and September 2005 when the Coast Guard deployed 49 rescue helicopters to the Gulf Coast region in response to Hurricane Katrina.[iii]
A more recent example of how critical system readiness can be occurred on 24 March 2012 when the 6 crewmembers aboard the International Space Station were forced “to take precautionary shelter in their respective Soyuz vehicles, about 30 min before TCA (Time of Closest Approach) of a small piece of Russian Cosmos 2251 satellite debris which passed by the ISS at 2:38:33am EDT.”[iv]  Fortunately, the Soyuz capsules were ready and able to serve as emergency shelters for the crew; and even more fortunately, the “space junk” safely passed by the International Space Station and the crew resumed its normal duties.
A final example of critical system readiness was the emergency response to the 29 January 2012 multi-vehicle accident that occurred on I-75 near Gainesville, FL.[v]  When fog and smoke from a brushfire suddenly reduced roadway visibility, 19 passenger vehicles and trucks became involved in a massive accident.  Ultimately, 11 individuals lost their lives and 21 others were hospitalized due to the accident which tasked emergency responders from two different counties.[vi]  The nearness of well-equipped trauma care, a recall of critical care staff, and sufficient emergency transportation were all factors cited for the high survival rate of victims who reached local hospitals.
Obviously, system readiness is vital in many different contexts.  In fact, readiness was one of the most frequently used words in the readiness-based sparing definitions that we reviewed for the previous post.  So what factors must come together to ensure a system’s readiness?  The Highway Mass Casualty Readiness Project of the National Association of State Emergency Medical Services Officials (NASEMSO) provides an insightful glimpse into the world of medical readiness.
“The EMS Incident Response and Readiness Assessment (EIRRA) is a self-assessment tool designed to measure the level of emergency medical services (EMS) preparedness for response to a highway mass casualty incident (MCI).  It is intended to be used by state, regional and local EMS agencies to evaluate the system’s capability to respond to large scale emergency incidents.”[vii]
The EIRRA self-assessment includes seven different factors in its readiness assessment process.  These factors are:
1.      Personnel – “There are sufficient numbers, types and distribution of prehospital emergency medical and support personnel who are well-trained and supported for responding to mass casualty incidents.”[viii]
2.      Infrastructure – “The emergency infrastructure includes the necessary communications, transportation, equipment and information sharing technology resources for assuring the best possible emergency response to mass casualty incidents.”[ix]
3.      Emergency Care System – “The emergency care system has adequate availability of well-prepared emergency response teams and medical facilities, including a well-developed specialty care system.”[x]
4.      Public Awareness and Notification System – “There is an effective public awareness and notification system in place, which includes preincident education of the public as well as notification during the incident.”[xi]
5.      Evaluation – “There is an effective evaluation system providing for a thorough review of the performance of emergency responders at mass casualty incidents.”[xii]
6.      Mass Casualty Planning – “Mass casualty planning has been thorough and is well documented.”[xiii]
7.      Governance – “In the case of mass casualty incident response, the roles and lines of authority are clearly defined among governing bodies, including local, tribal, state, federal and international.”[xiv]
For a final view of system readiness, we turn to the Department of Defense Dictionary of Military and Associated Terms[xv] which defines unit-level readiness as “The ability of United States military forces to fight and meet the demands of the national military strategy…. The ability to provide capabilities required by the combatant commanders to execute their assigned missions. This is derived from the ability of each unit to deliver the outputs for which it was designed.”
The U. S. Air Force uses the Status of Resources and Training System (SORTS) to measure and report its unit-level readiness across four areas, which include:
1.      Personnel – “Units compute the personnel [readiness] … based on the percentages of total and critical personnel available to accomplish the unit’s required wartime mission.”[xvi]
2.      Equipment and Supplies On-Hand – “is used to indicate the resource status of authorized equipment and supplies required to support the unit’s wartime mission(s)….”[xvii]
3.      Equipment Condition – “is used to measure the combat essential and support equipment that can be made ready within the unit’s response time to undertake the unit’s assigned wartime mission…. [and] is also used to indicate maintenance and equipment reliability, serviceability and operational status of assets.”[xviii]
4.      Training – “Training measurement is used to indicate the status of training needed to support the mission for which a unit is designed….”[xix]